This article will help you roll the ball more efficiently and consistently for more strikes with less efforts. First of all, let’s answer a question:”What are you hooking the ball for?” We hook the ball for entry angle! Some sports scientists found out if you hit the pocket at an angle of 3 to 6 degree, you have the biggest chance to knock all the pins down.

In the old days, the thumb came out of the ball first, followed very quickly by the fingers lifting and turning around the ball. That is the right way to hook the ball at that time. Gradually, bowling ball companies begins to upgrade the bowling balls with high-tech cores and coverstocks to make them hook even more with carry power to increase the strike percentage. At this point, the bowling balls will work more for us because they have  built-in engines and special coverstocks. We just need to wind them up and let them do their jobs. Here comes the words “rolling vs throwing”.

Are you rolling or throwing the ball?

In the modern days, you should roll the ball more rather than throwing it. It’s hard to persuade a bowler not to hit up the ball without showing him/her know how the bowling ball actually works and how hitting up will critically eliminate the efficiency of its motion.

When hooking the bowling ball down lane, you’re naturally applying certain initial axis tilt, rotation angles to the ball to make it roll down lane and hit the pocket. Even if you don’t know what axis tilt and rotation angle are, you are doing it.

Axis tilt (at) and rotation (ar) angles move the bowling ball out of its stable rolling position and dictate how the ball reacts down lane.

Axis tilt (at) is the vertical angle at which the ball rotates. Commonly known as spin, axis tilt is determined by the position of the thumb during the release.

Axis tilt is determined by the postion of the thumb during the release. In other words, you will see the ball leaning to the right (or left with lefty) when it’s off your hand and travel down lane.

If the hand turns too early, the thumb exits on top of the ball. Bowlers with a high degree of axis tilt will be able to see the top of their hand during the release and follow through.

The lower the axis tilts, the sooner the ball will enter its roll phase before making impact with the pins. You will have a feeling of the ball standing up from its tilt and hit the pins.

Axis rotation (ar) is the horizontal measure of the angle of the ball’s revolutions, and much like axis tilt, it is also determined by the bowler’s release. 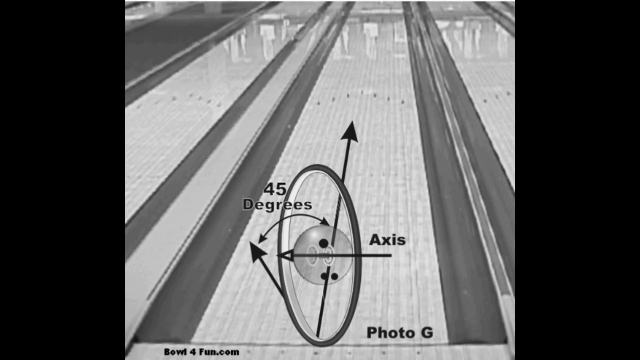 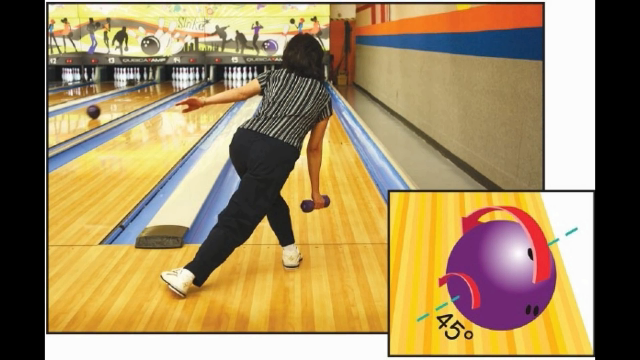 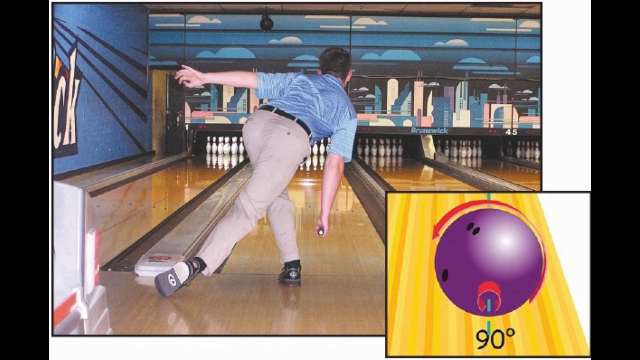 When the ball has no axis rotation, the fingers exited directly underneath the ball at the 6 o’clock position. End-over-end roll (0° of axis rotation) removes all hook potential from the ball regardless of the amount of revolutions, speed, or lane conditions.

High amounts of axis rotation (90° of rotation) will cause the ball to skid further, but unlike axis tilt, will cause an intense hook angle at the breakpoint.

More axis tilt and rotation angles help the ball skid more at the front part of the lane and retain energy before it comes back to its nearly stable rolling position at the pocket.

In short, you need to apply proper initial axis tilt and rotation angle so that the ball hits the pocket at the “golden moment” or at=ar>0.

The best way to make the ball far from its optimal cary position is to HIT IT UP! Why? Hitting up the ball is caused by bowler turning the ball to its side so early that they end up pushing fingers up in the air. This will generally makes the ball have higher axis rotation, least tilt with really high ball track which adversely results in many unexpected effects on multiple lane conditions.

So if you hit up on the ball, there would be some scenerios:

Hitting up gives the ball higher axis rotation and least axis tilt. The ball will lose its tilt sooner than its rotation angle. It the ball enters its roll phase at the pocket with at=0 and ar>0, you still have chances to strike. But you might notice the carry is not optimal leaving you some ringing 10 pins.

If the ball manages to enter the pocket, there’s a HUGE chance the ball has entered its ROLL-OUT phase (at=ar=0 or dead roll) leaving you lots of 5 pins and ungodly splits. Ouchhh!

#Scenerio 3: On long and/or oily lane

Hitting up gives the ball higher axis rotation but the ball will lose its rotation angles at much slower pace. The ball seems to skid too much missing the pocket or light hitting.

Through practice, you can alter or enhance your axis tilt and axis rotation. The best bowlers in the world have the ability to manipulate any and/or both of these at a moment’s notice.

Moreover, when hitting up the ball, you have a tendency to turn the ball to the inside part of the lane, trying to make it hook, this will hurt the intended trajectory of the ball.

Finally, hitting up on the ball will also cost you extra energy to make the core of the ball become useless with les revolution and hook potential. It seems you are wasting power and money on high-tech bowling balls. Let the balls work for you!

So how to eliminate the hitting up on the ball?

All great players who have achieved tremendous success on the lanes have certain things in common. One of those things is the extension part of the follow through as shown in the photo labeled “Extension.” 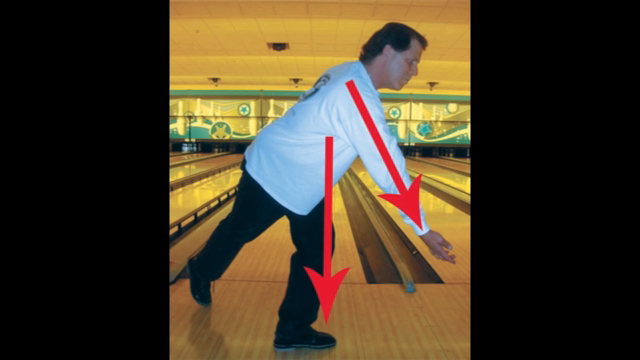 Let’s talk about the arrow drawn from the center of the back and pointing downward toward the top of the slide foot. There are a few key things to note here:

Here’s a drill to help you get the feel of this position:

As you look at the arrow on the arm, notice the arm is still fairly straight. That’s an important key. Another key element is in the next photo – “Follow through palm up.” 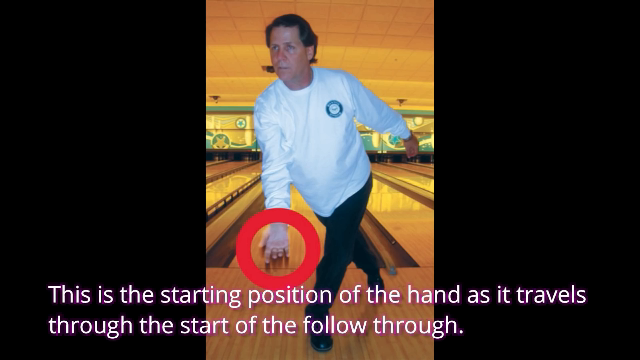 Elbow in thumb out

Now you’ve known the extention follow thru, here comes the last skill to complete your efficient release without hitting up the ball – “elbow in thumb out” just before the arm extention and follow thru. This is how to do it: 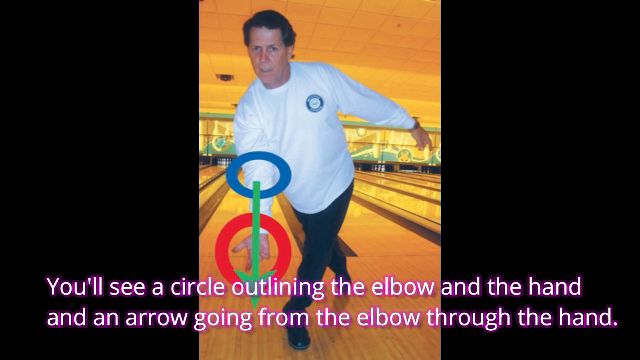 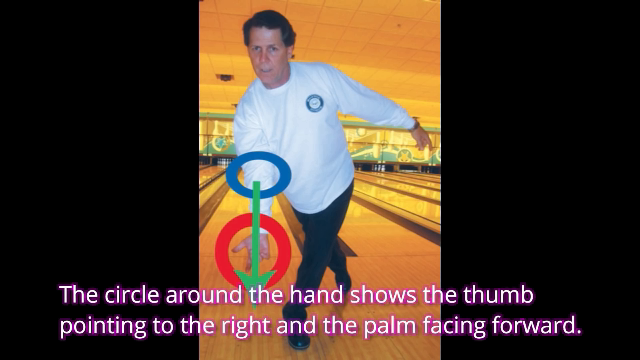 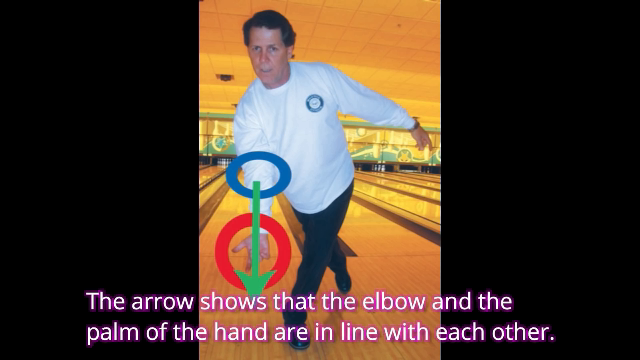 Another really ineffective thing you can do is to ‘short arm’ the follow through as shown in the “Short arm” photo. You can see that there is no extension whatsoever with the arm as shown by the two lines. Most bowlers create this poor habit by trying to increase revolutions on the ball. Unfortunately, it has the opposite effect and actually reduces revolutions.

So let’s combine together: 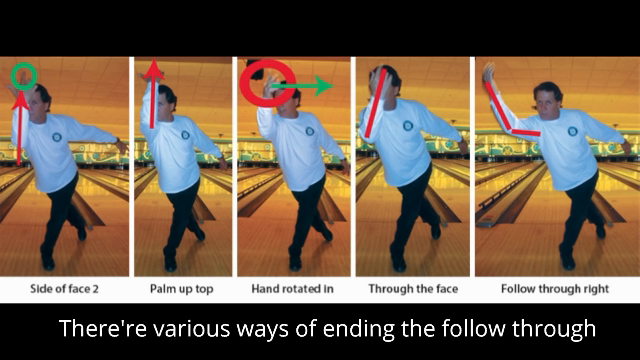 Here are two of the worst things you can do in bowling. They will totally destroy your ability to move to a higher level of accomplishment as a bowler. We will start with the most common mistake known as the “chicken wing.” 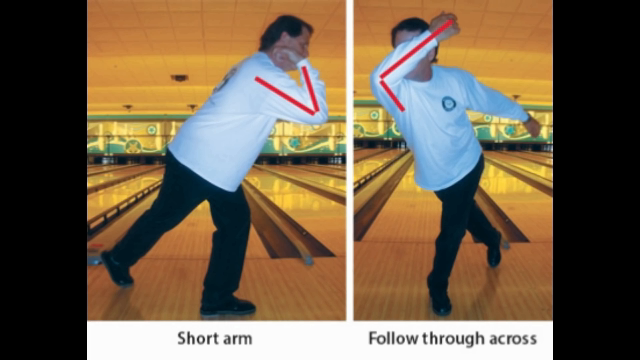 Just remember this: “be nice” to the ball at the release point and not hit up on it. there are no pins on the ceiling; they’re all on the pin deck!

This can be a difficult skill to master. However when you’ve accomplished it, you will find your ball can hook even more with bigger angle down lane and even has more revolution. It’s fantastic isn’t it?

One thought on “Bowling tips: How not to hit up the ball & strike with less efforts!”