A lot of bowlers in the internet age have been searching YouTube and other sources for those marvelous, slow-motion videos of all the pros’ releases. We want to see every inch of our favorite bowler’s release, in super slow-motion and in high definition. We try to copy-and-paste that release right into our own game. I say “we” because I have been guilty of the copy-and-paste routine myself for years, with very mixed results.

The internet is loaded with great slow-motion videos of the best bowlers in the world. They are great to watch, but the problem arises when we try to copy them.

Honesty is the best policy. This isn’t a lecture on how you should interact with mankind, but rather that you should be honest with yourself.

The “many” versus the “few”

Some bowlers do have a wrist that is strong enough, but they still can’t get it to cooperate and do the right things at the right times.

Randy Pedersen tells you on many of the PBA telecasts to “work the inside of the ball” if you want to throw it like the pros with a rev rate north of 400 RPM. Well, let me guess: when you work the inside of the ball, you spin it like a top, and your rev rate is less than when you started. I’ve seen it over and over again. Not to worry, though: the pros are not bowling league with you, and you aren’t likely to be shoeing up against them, ever, short of a pro-am event.

A look at the “pro release”

I know the honesty thing is going to be very difficult for many of you. Some of us can be honest with everyone but ourselves, so I am going to share with you why most people fail when trying to learn the pro release.

To successfully execute the pro release, you must first cock your wrist to the inside, and you must also cup your wrist.

Let’s do a quick review of what this means. Cocking your wrist is a lateral movement toward your stomach when you are viewing your hand palm up. Cupping your wrist is when you bend your wrist in the direction of your forearm with your palm facing up.

Some bowlers do the cock/cup at the very start in the stance, while others do it sometime during the swing.

You must get or keep your fingers on the inside of the ball (cocked wrist) before it gets to the bottom of the downswing. If you cock your wrist to the inside during the setup, and you can maintain that position until just before delivery, that is likely the easiest thing to do.

Experience tells me, however, that the hand position some bowlers use in the setup has little to do with what the hand does after the ball goes into motion. For that reason, reviewing videos of your release is a must. The mind’s eye will lie to you, but the camera never will.

In the photo below of PBA star Kris Prather, you will see that the ball is near the heel of the slide foot, and the wrist is fully cocked and cupped and ready to go into action. Your wrist must be in this position by this point in the swing.

Once the ball reaches the heel of your slide foot, your wrist goes into action. The first action taken is uncocking the wrist. You simply unscrew the ball, meaning you move your fingers from the inside of the ball around the bottom (below the equator) and slightly to the other side. The more your fingers move to the outside of the ball, the more axis rotation is produced. I suggest you start with very little axis rotation when you are first learning. More axis rotation usually means more axis tilt when attempted by a beginner (for a refresher on the difference, click here).

It is imperative that you get the wrist fully uncocked if you wish to throw the ball with very little axis tilt, as I think you should.

Below, you will see that the ball has only moved from the heel to the bowler’s ankle, and the wrist is nearly fully uncocked. 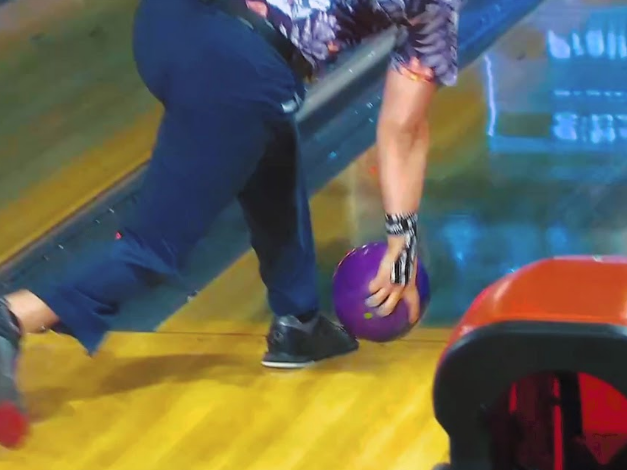 At this point, the wrist uncocks and starts to uncup. This is also where axis rotation and tilt are created. (Image courtesy of PBA YouTube video)

At this point, the ball has only traveled four to six inches, and it is moving at about 19 mph, so only a fraction of a second has passed since the start of the wrist uncocking motion. The wrist starts uncupping when the fingers have moved laterally to the bottom of the ball.

The wrist should not be fully uncupped until the ball is past the toe of the slide foot.

Our next photo shows the ball at the toe of the slide foot. The wrist is nearly straight laterally and uncupped to a flat position. The thumb has also pretty much exited the ball. 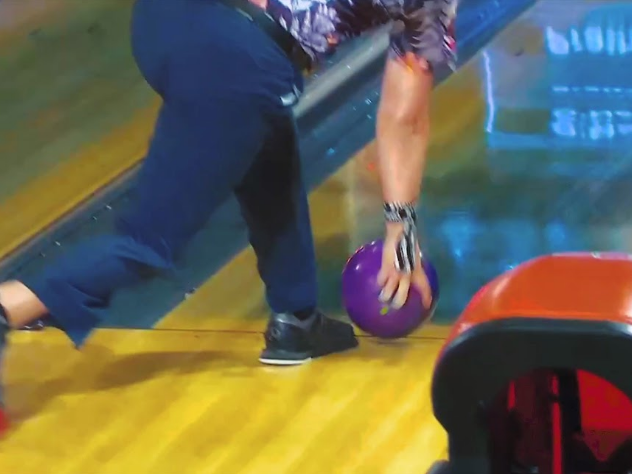 As the ball passes the toe, the wrist is fully uncocked, and still “unloading” as the wrist continues to uncup. (Image courtesy of PBA YouTube video)

If you push on the sides of the finger holes with the sides of your fingers, you will tilt the axis up and spin the ball. 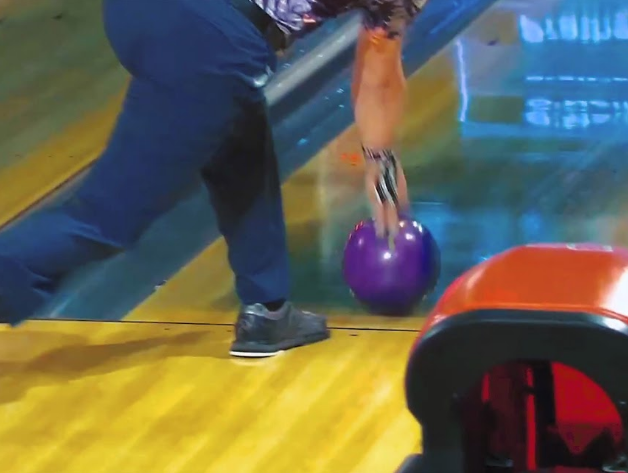 You must do all of these movements with perfect timing, or you will have botched the release. The entire release process takes a little over a foot of distance and must be completed in about 0.05 seconds. That requires a pretty quick wrist and lots and lots of practice.

Where the Average Joe goes wrong

So, where do most bowlers go wrong?

Experience tells me that they either opened the wrist too soon, they didn’t get the wrist fully uncocked, or both. If your rev rate is too low, you likely uncupped the wrist too early, assuming you didn’t grab the ball and hang onto it too long. If you have too much axis tilt, you likely didn’t get the wrist fully uncocked, or you are trying to apply too much axis rotation and you are pushing on the sides of the finger holes with the sides of your fingers instead of the pads.

If you roll a ball end-over-end with a straight wrist (not cocked at all) with the pads of your fingers, it is pretty much impossible to tilt the axis up unless your hand and fingers are made that way, and some are. If you turn your hand’s palm up and sight down your arm to the tips of the fingers and they curve to the left (for a righthander), then your hand/fingers have some built-in axis tilt. There isn’t much you can do about this, short of changing your fit to compensate.

While you are looking down your arm, notice if it is straight at the elbow or if it takes a turn to the right. This is most common with women, but lots of men have this shape to their arm as well. An arm that is built like this has its own uniqueness when it comes to releases. I’ll talk more about that in future articles.

Keep in mind that everything here assumes that your wrist is strong enough to do these maneuvers quickly and smoothly.

A lack of wrist strength is the reason so many bowlers, especially smaller framed ones, are not capable of doing the pro release.

Is the pro release worth all the hard work?

Not in my opinion. If you are only going to bowl league on house shots or even bowl tournaments on league-style oil patterns, it’s simply not necessary. The pros use this kind of release because they bowl on flatter oil patterns with little built-in forgiveness. You need to always match your ball roll to the oil pattern you are bowling on. In my opinion, the pro release is not the best for house shots unless you have all the other skills of a professional bowler to go with it.

But we like to dream, right? What if you could copy-and-paste that 450 RPM, turbocharged EJ Tackett release into your game and then take it to league night? See, I know what you are still thinking, because BTM readers never give up. The handful of league bowlers who do manage to learn the pro release will often find that their ball overreacts on league night.

Why the pro release and house shots don’t match up

Those wonderful little dry boards on the outside part of the lane that the lane man left to gently guide your ball back to the pocket when you miss a little suddenly turn into a raging hook monster that grabs your 450 RPM turbocharged ball and throws it through the nose of the headpin or even Brooklyn. The lane man also left you a nice big puddle of oil in the middle to hold those pulled shots so they also go to the pocket. That 450 RPM turbocharged ball sees that big puddle as a meager mist of oil, and it’s not enough to hold back anything. So you jump way left and play angles that are so open they’d make almost anyone uncomfortable.

How are you liking that new release so far? As they say in the South, “You got more learning to do.” Now, you have to learn all about laying the ball down by the left gutter and sending it right. That includes learning to bowl from in front of the ball return. Go stand up there and look at the lane. It looks very different than the zip code you’re used to living in. Also, you are likely to need one to two more miles per hour of ball speed, and your equipment is likely set up to hook too early and will require some adjusting.

These realities can cause a professional bowler to struggle on house shots, and many of them do in fact feel less comfortable on these easy conditions than on tougher ones. For this reason, amateur bowlers can sometimes beat pro bowlers on house shots, but they stand very little chance of competing with pro bowlers on sport shots. If you are an amateur and you manage to successfully learn the pro release, you may still wind up bowling worse on house shots than you did with your old release.